You don’t want this game. You are not that kind of horrible person. Please stay away from this game, you and the world around you deserve better. It’s better that you don’t even know this horrible game exists.

Still there? Well, if you’ve come this far, you’ve deserved it.

Cards Against Humanity is a party game for horrible people. Unlike most of the party games you’ve played before, this game is as despicable and awkward as you and your friends.

Its development originated from a successful Kickstarter campaign and has received acclaim for its simple concept backed up by its satirical, mature content. And, strangely enough, it has been received quite well by the media. It does cross certain boundaries, but in a way that it’s probably too funny to be a concern. Yes, the game may be confronting at times, but the fact you’re still reading probably indicates you are going top be alright, we assume you’re not easily offended, right? But don’t come back later and say we didn’t warn you!

So this is a horrible game, but then at the same time apparently this is also an awesome, offensive (you like it), and fantastic party game. You may pee your pants laughing and learn that your mom is terrible (as in, terribly funny) or that your neighbours are actually that messed up. Prepare to be shocked by the experience. Once you start playing the game, there is no way back for you.

So, this game can be a lot of fun or kinda of boring and awkward, it’s all about who you play with. If you play with people you don’t know very well, it’s not that great as there’s a lot of possibilities, and it’s hard to play to someone’s sense of humor. If you’re playing with people you’ve known for a long time, this game is a great time, and everyone will be in tears laughing through out the experience.

And please take this piece of advice from us now … we’re serious about this … do not play this with your kids, even if they’re grown up. You’ll thank us later.

The game concept is quite simple actually. it consists of two sets of cards, the black cards with the questions or the statements, and the white cards with the answers. Each round, one player asks a question from a black card, and everyone else answers with their funniest white card.

I guess you’d like to see some examples now. Well you asked for it …

“I learned the hard way that you can’t cheer up a grieving friend with ……..”
“… Giving the tumor a cutesy name”

“Life for American Indians was forever changed when the White Man introduced them to ….”
“… Dying”

“In the beginning there was …”
” … A sex comet from Neptune that plunges the Earth into eternal sexiness”
“And the Lord said, “Let there be” …
” … lots and lots of abortions”

Well, there you had it. And you’ll find many more race, sex or disease oriented cards. But believe us, it is funny 🙂 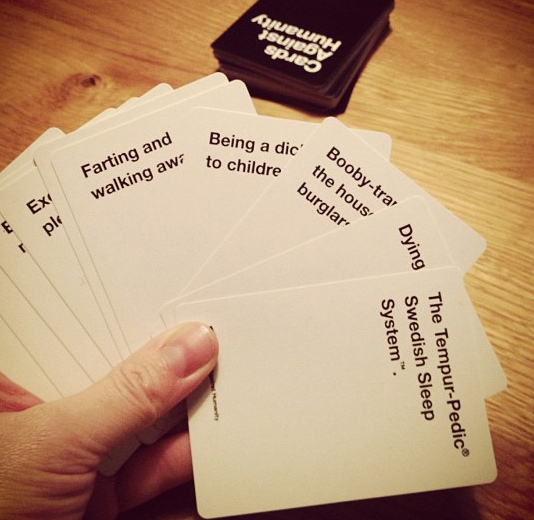 You are going to like the write-your-own cards, because you can make it personal to the people you play with. Highly recommend for friends with a sick sense of humour! You can play this every time we have people we like over. Definitely not for casual acquaintances, prudish folk, or work parties. Inappropriate in the best way.

The main game gets repetitive if you play it a lot so we would highly recommend the (cheap) expansion packs to keep it going.

All in all, this is a unique (but horrible) game that forces you to think outside the box to make the most outrageous and shocking combos.

One last example, to close it all off.

Q: “What is fun until it gets weird?”
A:  “A bunch of idiots playing a card game instead of interacting like normal human beings”

Cards Against Humanity. Don’t come back later to complain, because we warned you!